Out of high school, I was accepted to the Big Three journalism schools: Columbia, Missouri, and Northwestern. I chose the University of Florida, not for its j-school but for its weird and unruly student newspaper. The Alligator still must be the largest college paper with no adviser – the newsroom has zero adult supervision. Get elected editor at 20 years old and you can’t legally drink, but you manage a six-figure editorial budget. The results are often beautiful, educational chaos. Here was my final column as editor, trying to explain as much…

The editor strikes back: The end of an error

Or maybe that was yesterday. I don’t remember if Armageddon was supposed to happen on June 16 or 18. It’s been three months since a UF student proclaiming to be Jesus Christ walked into my office and told me all about it.

His name was Alan, and he was just a freshman.

Usually, the crazy people who walk into the newsroom and demand to see the editor fall into three categories:

1. Elderly bums who say the CIA is trying to kill them and want between $20 and $100 to tell their story.

2. ‘60s acid freaks who want to tell the world that marijuana isn’t unhealthy – they’ve been smoking it for 35 years and never felt better.

3. Student Government weenies who demand we print their typed, 10-page, single-spaced, spaced-out letter on the ramifications of the obviously political recommendation of ASFAC to the Wave-dominated Senate when the proposal should have really gone through the B&F and blahblahbahblahblahblah.

But Alan…here was a special case.

He was a nervous little guy. WIth sweat dripping from his scalp, coursing down his face and running into his mouth, Alan whispered to me that not only was he Jesus Christ, but I, Michael Ross Koretzky, was really “Michael, the prince of your people” as mentioned in the Old Testament (Daniel 12:1).

There are four other direct descendants of the Biblical prophets living today, Alan said, and I’m the one of Russian descent. The others are Francois Mitterrand (France), Charlton Heston (England) and Steven Spielberg (Germany).

Alan said we had to enlist the others if the world was to avoid nuclear holocaust. I said I’d think about it. Then I called the UF counseling center.

They referred me to the Alachua County counseling center. Someone there said he’d call Alan at his dormitory. He must have forgotten, because two days later, Alan was back.

To prove his story, Alan gave me an 8-page dissertation of his beliefs, the March issue of Forbes and the 20th anniversary issue of Rolling Stone.

He also said he was Luke Skywalker.

I called the counseling people back. They again said they would call Alan. They must have remembered this time, because Alan returned three days later and told me I was sinner. He took back all his reading materials. I never saw him again.

Looking back, I should’ve left Alan alone and called the counselors on those SG weenies.

This is the last Alligator published with my name at the top of the staff box. It’s tradition for the editor to write a sappy goodbye column in his last paper. Unfortunately, I’m not going anywhere.

During two consecutive six-month terms as editor, I’ve failed Fundamental Math twice and subsequently have a year left before I graduate.

Working at The Alligator has a way of overshadowing classes. When Johnson Hall is burning down, it’s difficult getting motivated to listen to a 50-minute lecture on the “Distributive Properties for Multiplication over Addition of Rational Numbers.”

But I still can’t tell if I failed Fundamental Math because I was too busy here or because I’m just stupid. I suppose I’ll find out when I take the class for the third time.

What’s so scary is that during my two terms as editor, I’ve had to draw up two budgets for the editorial department – for about $100,000 each.

What many people don’t know about The Alligator is that college students are solely responsible for its content. It’s the largest independent student newspaper in the country.

UF Administration and Student Government don’t give us any money, so they can’t give us any orders. There are career staffers here – the adults, if you will – but they have nothing to do with the newsroom. They see what’s in The Alligator every morning along with 45,000 other readers.

As far as I can tell, The Alligator is the largest college newspaper in the country without an adviser. That really pisses off some people.

Last fall I wrote a story about what would happen to Gainesville in a nuclear war. According to the U.S. State Department, Hogtown is the target for two 1-megaton warheads. Just one would blow open a crater from the Gainesville Mall to Burrito Brothers.

That’s how I wrote it, but the next day, I got a call from the owner of Rocky Rococco’s, a pizza place just up the street from Burrito Brothers.

The owner was furious – I didn’t include his establishment in the list of casualties.

“I just don’t understand why Burrito Brothers is more important in a war than Rocky Rococco’s,” the owner said.

I tried to explain that Burrito Brothers is a local landmark, and I just wanted someplace on the edge of the crater that readers could easily identify with.

“Well, I just don’t know how I can continue to advertise in your newspaper, then.”

I told him the advertising employees have no impact in the newsroom, either. So he resumed yelling at me.

I told him to stop yelling. “And don’t call here anymore if you’re going to yell, or we’ll hang up on you.”

Since I became editor, many readers have told me The Alligator would be a better paper if I allowed journalism professors to edit stories, a method used by some other college newspapers.

I always laugh when I hear that.

Here’s a paragraph from one story a student submitted to us after she turned it in for a journalism class last fall. It’s about a dormitory floor for German students, and everyone on the floor speaks German:

At the southwest corner of Murphree building M, a different species of auditory fodder feeds the skull. The quick, clean, ice-sharp slips of German slice through the humid net of atmosphere. All of a sudden this background noise isn’t automatically digested by the brain. A signal of distress is sent out by the body’s control room.

Her professor gave her a B+ and wrote on the story:

Much better – how about this for Campus Page…or Alligator?

And some people wonder why we like being independent. Hahahahahaha.

By the way, this isn’t even the longest goodbye column from an editor. I just wanted to say that.

Every semester, The Alligator staff invites members of Student Government to visit the newsroom and air any gripes they have about our coverage. My favorite comment came from a student senator last semester, who told me my biggest problem as editor was, “Your editorials are so biased.”

In the past year, readers have called and written to tell me I’m a “pervert,” “homosexual,” “communist” and “yellow journalist.”

Because I was editor of the most award-winning student newspaper in the country, I felt it was important not to lend credence to such name-calling by responding to it. Insults come with this job, and I accepted them without comment. However, starting tomorrow I’m calling each of these individuals and telling them to fuck off. 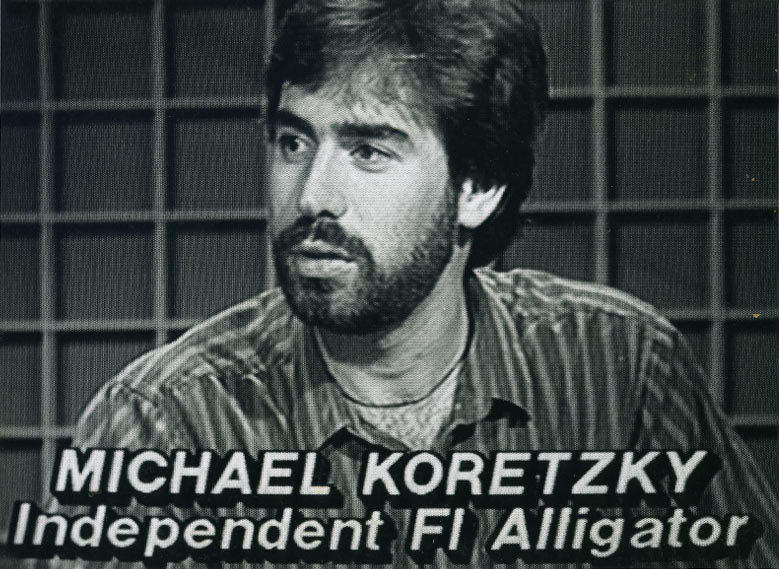